Governments take a new approach to ending the exodus of children 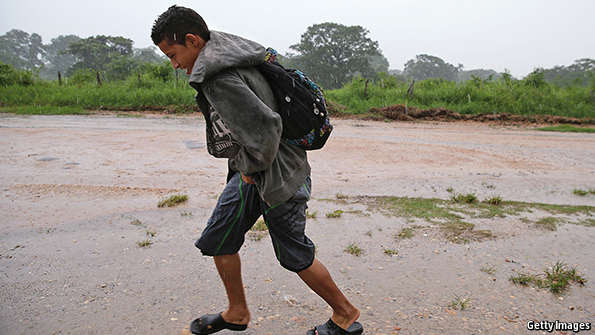 A YEAR ago American border agents faced a freak phenomenon. Tens of thousands of Central American children, many more than usual, surged across the border from Mexico. Rather than running from la migra, they handed themselves in, hoping eventually to be set free to join family members in the United States via a loophole in the immigration law. Television images of ragged-looking youngsters held in detention camps horrified the United States and the whole region.
Since then the numbers have fallen somewhat and the cameras have moved elsewhere, though the United States’ Customs and Border Protection still says more than 15,000 unaccompanied minors have been apprehended in the past six months (see chart). Many more might have come had they not been stopped by tighter security in southern Mexico. Mexico’s border patrol deported about a third more Central American migrants in 2014 than in the year before. At a summit in Panama City on April 10th and 11th Barack Obama reiterated his goal of spending $1 billion next year to tackle the causes of migration from Guatemala, El Salvador and Honduras, known as the Northern Triangle. Experts say his proposal, coupled with joint efforts by the three countries to stop young people from fleeing, mark enlightened new ways of trying to revive Latin America’s most violent region. They face big hurdles, however.
The $1 billion earmarked for the three countries, which has been championed above all by the vice-president, Joe Biden, is three times what America allocated for spending on the region last year. Doris Meissner of the Migration Policy Institute, a Washington think-tank, says the Obama administration deserves “a great deal of credit” for sticking with the issue after the media lost interest. Four-fifths of the aid proposal is aimed at building up civilian institutions and fostering economic development. This is an “important shift” from the usual focus on law enforcement, says Adam Isacson of the Washington Office on Latin America, an advocacy group.
The proposal still needs to get through Congress, and the sums may be whittled down. American cash will not solve the problem by itself. But if Congress blocks the aid package, it will undermine efforts by the three Central American governments to implement their own plan to stem the exodus, says Eduardo Stein, a former vice-president of Guatemala.
Surveys show that migrants go north not primarily to be reunited with families, but to escape violence and economic hardship. The murder rate in the Northern Triangle is among the highest in the world. Around a quarter of young people there neither study nor work, more than anywhere else in Latin America. 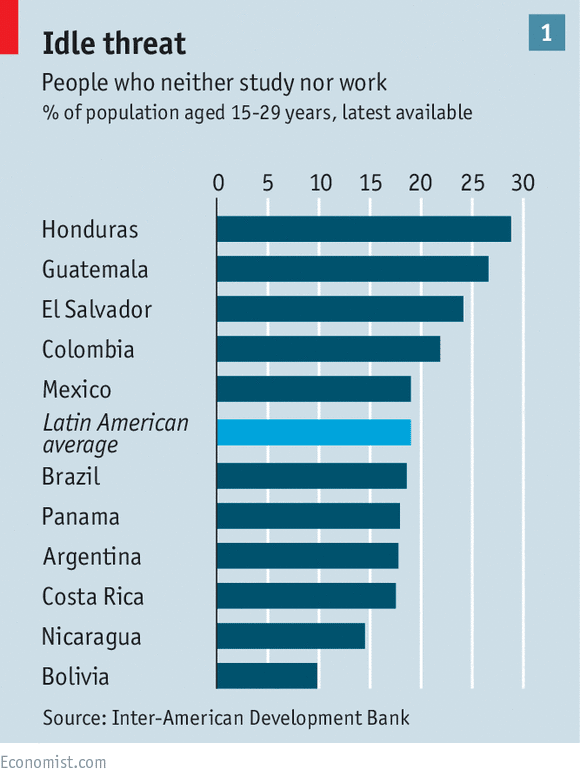 Recognising a shared set of problems, the three governments have agreed on a joint plan to bolster job-creating industries such as tourism, manufacturing and agri-business. They also plan to strengthen regional infrastructure and cut the cost of energy, which is the highest in Latin America. At the Panama summit Otto Pérez Molina, Guatemala´s president, and Juan Orlando Hernández, his Honduran counterpart, proposed the forging of a customs union, which will allow the free flow of goods across their shared border, reducing transport costs. They hope it will soon include El Salvador. The three countries are also negotiating with Mexico for a pipeline to bring Mexican gas to the region, which would help power their shared electricity grid and lower energy costs. All this, if it happens, will create an economic bloc, which should attract more investment.
The “Alliance for Prosperity” also calls for improving education, public safety, access to justice and institutions such as tax agencies. These issues are harder to deal with regionally, rather than country by country. However, some advances have already been made. Before the migration crisis, Mr Hernández signed an agreement with Transparency International to audit public spending in areas such as education and health. Kurt Ver Beek, co-founder of Transparency’s Honduran affiliate, says this should reassure the United States that the “Biden billion” will not be pilfered.
Other obstacles remain, though. Violence in El Salvador has soared since a truce between rival gangs broke down last year. March was the deadliest month in a decade. Guatemala has presidential elections in September, which may slow the integration process. Mr Pérez says he will do his best to ensure that the momentum continues after he leaves office, calling the Alliance for Prosperity a “national plan, not a government plan.” But he faces a potential run-in with the United States if he fails to renew the mandate of the UN-backed International Commission Against Impunity in Guatemala, which is aimed at shoring up the feeble justice system. Mr Biden said in March that without a new mandate for the commission in September, America’s Congress would be reluctant to support the aid request. Mr Pérez, a right-winger who is protective of people who may have committed crimes during the country’s civil war, responded that he would not accept “impositions”.
The United States helped stoke the region’s troubles, both by backing anti-Soviet regimes in civil wars during the 1980s and by expelling gang members from Los Angeles to El Salvador in the 1990s. More recently, it has focused narrowly on law enforcement and fighting drug-trafficking. A new approach, in which the United States, Mexico and international donors work alongside Central America’s governments to get at the roots of the region’s worst problems, is worth a try.
From the print edition: The Americas
Publicadas por masterecointer@gmail.com a la/s 18:46 No hay comentarios.: