The Secret Life of Panama City 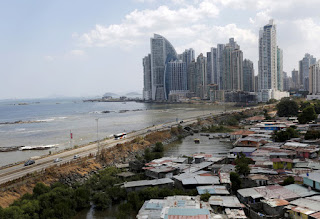 Panama, which offers up its national flag to international shippers, local addresses to ghost corporations, and an anything-goes banking system to anyone with money, has long been renowned as an accommodating place for business. On a visit to the country in the late nineties, I was shown around by a Panamanian businessman, a friend, who took me to a newly built hotel and office tower in downtown Panama City. The gleaming green-glass tower rose incongruously above an otherwise pleasant district of one- and two-story residential homes and embassies, overlooking the blue waters of the bay and the Pacific Ocean beyond. Very few of the tower’s offices appeared to be occupied, I noted. “It’s a money laundry,” my friend said matter-of-factly.

I asked my friend what exactly he meant by “money laundry.” Over the next few minutes, with beautiful simplicity, he told me how it worked. A Panama-registered company was, like a Tijuana wedding, something that could be swiftly drawn up by one of Panama’s slew of sharp-suited lawyers. If you were a narco-trafficker, and needed to launder several million dollars a month in illegal income, for instance, you could set up several dozen Panamanian businesses, all of them entirely fictitious, and then make arrangements with the owner of the new tower to “rent” as many offices as you needed. After a few minutes of calculations made by eyeballing the tower and counting its number of floors, my friend concluded that it would be possible to launder as much as a hundred million dollars a year through that tower alone.

There are, of course, many other ways to hide or to launder money, and this week’s spectacular public dumping of documents from the Panama law firm Mossack Fonseca, the so-called Panama Papers, shows some of the ways the global offshore banking system, of which Panama is an integral part, allows wealthy people of all kinds—not exclusively narco-traffickers—to do so. (Banking havens like Panama’s also exist in the Caribbean quasi-nation of Grand Cayman; on the island of Jersey and the Isle of Man; in the Pyrenean sub-nation of Andorra; and in several other aeries around the world. Perhaps the most famous, and possibly most lucrative, offshore bank of all is the nation of Switzerland.)

But as demonstrated by my friend, using the gleaming office tower as a case in point, bricks and mortar are a clever way to hide one’s money, and Panama has long made itself available to real-estate developers who cater to this booming economy. So successful has this resource been for Panama that, seventeen years later, the low-level neighborhood around the tower has wholly disappeared, replaced by scores of newer towers of every hue and description; one, almost lost amid the welter of steel and glass, is shaped fancifully to resemble a corkscrew. The last President of Panama, Ricardo Martinelli, who ran the country from 2009 to 2014, and who is now living in Miami, accused of corruption by Panama’s Supreme Court, was a great believer in public-infrastructure projects, building highways, ocean causeways, and a subway system that will cost billions of dollars. The firm that Martinelli favored with the bulk of these costly projects, the Brazilian engineering giant Odebrecht, is currently caught up in a sweeping corruption scandal at home.

In 1999, when the Panama Canal was finally returned to Panamanian sovereignty, a great sell-off of property in the former U.S. Canal Zone ensued, and I reported on it for the magazine. One day, I accompanied Nicolás Ardito Barletta, a patrician Panamanian economist and former World Bank vice-president, who had been put in charge of the investment-promotion campaign, on a helicopter tour of the Zone. Everything from former military bases to ports was up for grabs. On our tour, Barletta told me that the vision for the future of the country was to be “a little bit of Singapore and a little of Rotterdam.” For one of our rides, he took along two prospective investors, from Spain’s Catalan region. They were uneasy in my presence, and later I found out why. One, a man named Juan Manuel Rosillo, was out on bail for criminal charges relating to a multimillion-dollar tax-fraud scam in Spain. His friend and partner was none other than Josep Pujol, a son of Catalan President Jordi Pujol. (A few months later, back in Spain, Rosillo was sentenced to six and a half years in prison for his crimes but was released on appeal. A year later, he was sentenced to a new prison term after a traffic incident in which his Bentley struck and killed a young man, but Rosillo fled the country—back to Panama, where he lived until his death, of an apparent heart attack, in 2007. In 2014, Jordi Pujol, the former Catalan President, acknowledged to police investigators that he had used offshore bank accounts for decades to move sums of money, which he said were accrued from an inheritance, around the world. Among the countries involved in his activity, which is still being investigated, was Panama.)

On that trip, I also met with a couple of prominent foreign fugitives who were resident in Panama, among them Jorge Serrano Elías, the former President of Guatemala. Serrano had skipped his home country for Panama after being overthrown in 1993. He had been formally accused in Guatemala of stealing tens of millions of dollars in public funds, but had been given a warm welcome in Panama, and he seemed at ease when we met on the grounds of a luxury housing estate and polo club he was building outside the city.

A few days later, I asked Panama City’s mayor, Juan Carlos Navarro, a Harvard-educated man with Presidential ambitions, about his own vision for Panama and how he felt about its louche reputation, especially its tradition of harboring questionable characters like Serrano. He did not like my line of questioning. “I’ve always thought of Panama as sort of like Switzerland,” he told me. He had scowled when I suggested that his country’s reputation abroad was more like that of Casablanca, or Tangiers. “They bring money, they invest here. What’s wrong with that?” he said. But, I asked, what if someone like a war criminal or the next Mengele decided to come to Panama? Navarro shrugged. “That would be no problem, either,” he said. “I look at it as a kind of service provided by Panama to the international community. The world can think of Panama as a refuge of last resort. . . . And if they want to live here quietly, bienvenidos.’”

It may be mere coincidence, but it was interesting to note that Erhard Mossack, the father of Jürgen Mossack, a part owner of Mossack Fonseca, was a former Waffen-S.S. officer who immigrated to Panama with his family after the Second World War. Then, as now, Panama was an extremely accommodating place.
Publicadas por masterecointer@gmail.com a la/s 04:54