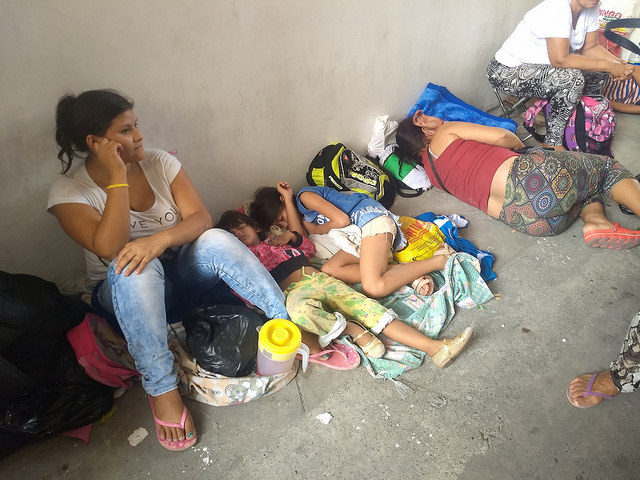 Venezuelans on streets of Cúcuta, Colombia. (Photo: Provea ONG/Flickr)
Venezuela’s economic implosion and political turmoil have spurred the largest exodus in the western hemisphere, with an estimated 3 million people having fled the failing state. And there are predictions the number could swell by 2 million in 2019. With about 80 percent of the Venezuelan migrants and asylum seekers heading to neighboring countries in South America, as well as the Caribbean, host governments in 2018 increasingly recognized these newcomers are settling in for long-term stays.
Amid continuing outflows of several thousand Venezuelans a day, overwhelmingly to Colombia and Peru, the region has largely maintained generous policies towards the arrivals. But as capacity has become increasingly stretched, there were signs in 2018 that the region’s tolerance was being tested. 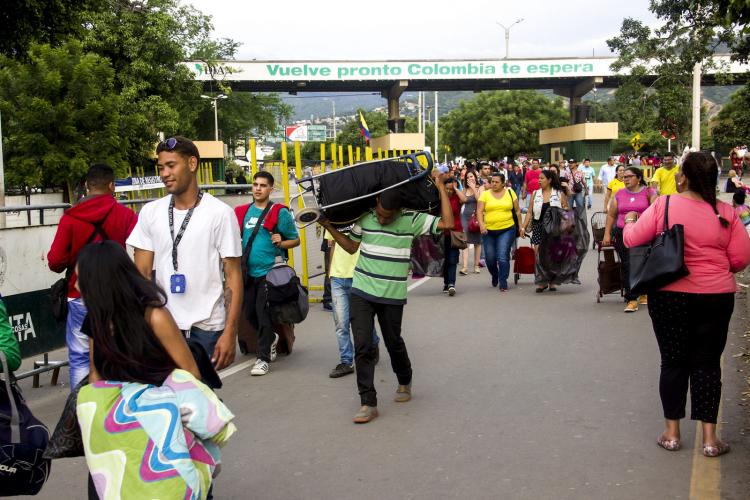 Venezuelans in Cúcuta, Colombia. (Photo: Provea ONG/Flickr)
Some countries enacted more restrictive policies towards Venezuelans. In August, Peru implemented tightened entry rules and now requires a passport, prompting a rush of Venezuelans seeking to get in before the requirement took effect. Chile in April began requiring Venezuelans to apply for a “democratic responsibility” visa from within Venezuela if they wish to become temporary residents and work. In February, Colombia temporarily stopped offering its Border Mobility Card, which allows some Venezuelans to freely cross the border to obtain food and medicine. And there were attacks on Venezuelan migrants and reports of rising xenophobia and hostility.
Still, Colombia, which hosts more than 1 million of the Venezuelans, as well as Peru and others have created temporary programs extending legal status and work permits to the arrivals for one to two years, amid a recognition that those without status can easily become victims of labor or sexual exploitation. While these have proven a lifeline for many, the temporary programs represent an improvised patchwork of responses. Recognizing the growing need for a regional response, 11 countries in September adopted the Declaration of Quito on Human Mobility of Venezuelan Citizens in the Region and eight of them later launched an action planemphasizing regularization for the migrants and integration.
Figure 1. Top Destinations for Venezuelans in Latin America and Caribbean, October 31, 2018 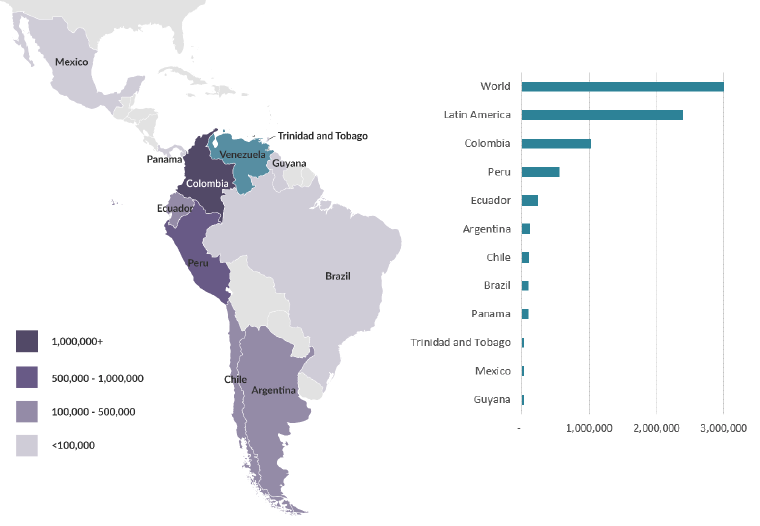 Source: UNHCR Operational Portal Refugee Situations, “Venezuela Situation,” November 30, 2018, available online.
Many countries’ humanitarian protection systems are ill-equipped to process the current need, leading to long backlogs that have led many Venezuelans who might qualify for asylum to choose to regularize instead, which is often more expedient. Despite the low asylum recognition rates, a number of countries hosting Venezuelans have enacted temporary stay programs.
Figure 3. Top Destinations for Venezuelans in Other Forms of Legal Stay, October 31, 2018

Source: UNHCR Operational Portal Refugee Situations, “Venezuela Situation,” November 30, 2018, available online.
Chile in 2018 became the most recent country to create a temporary stay visa for the Venezuelans. Called the Visa of Democratic Responsibility, the document grants Venezuelans the right to stay and work for one year and is renewable. Applicants must apply at the Chilean embassy in Caracas with a passport (rather than national ID card), whereas before they could get a visa on arrival without a passport. Chile’s action follows similar ones taken in 2017 by others: 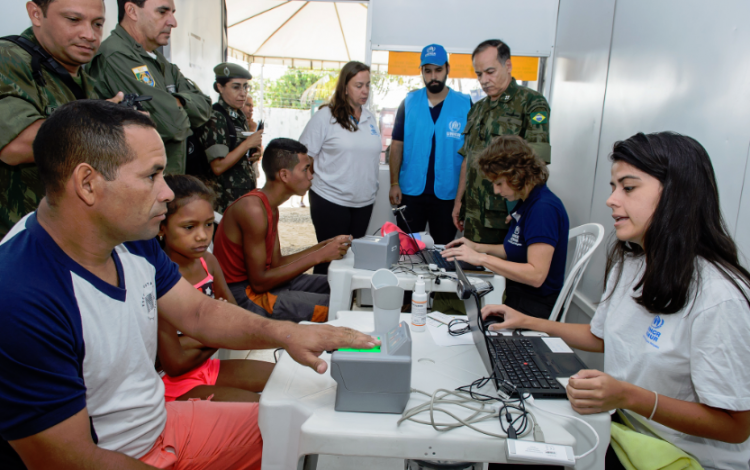 Processing of Venezuelan migrants in Brazil. (Photo: Alexandre Manfrim/Ministério da Defesa Brasil)
Tensions and Backlash Mounting
Despite a general openness to the extraordinary outflows, tensions have risen in regions bordering Venezuela, with clashes between migrants and locals. In August 2018, Brazilians burned a migrant camp for Venezuelans near the border, resulting in the deployment of Brazilian troops to the border. There have also been brief border closures between Brazil and Venezuela. In Brazil, most Venezuelans are concentrated in Roraima, one of the poorest states, which has led to growing resentment. Though the governor there floated a plan to return Venezuelans to their country (and sued the national government demanding the border be closed and her state be compensated for rising education and health care costs), incoming Brazilian President Jair Bolsonaro ruled outsending them back.
Amid signs that the warm welcome afforded Venezuelans fleeing staggering inflation, food insecurity, and a troubled political system may be tempering, it remains to be seen how host countries will respond in 2019—particularly as the exodus increases.
Publicadas por masterecointer@gmail.com a la/s 10:54