Stephanie Kelton is a professor of public policy and economics at Stony Brook University. She was the Democrats' chief economist on the staff of the U.S. Senate Budget Committee and an economic adviser to the 2016 presidential campaign of Senator Bernie Sanders.
Read more opinionFollow @StephanieKelton on Twitter

There is a doctrine among mainstream economists holding that: (1) government deficits push interest rates higher and (2) rising interest rates crowd out private investment. The government can take more of the economy’s financial resources, but only at the expense of lost private investment. This means that running budget deficits has at least some downside.
Paul Krugman is a believer in this doctrine. I’m not, and he’s asked me to explain why. He is responding to a column I wrote critiquing his view of modern monetary theory.
I’m going to respond directly to the questions he raised:

Are MMTers claiming, as Kelton seems to, that there is only one deficit level consistent with full employment, that there is no ability to substitute monetary for fiscal policy? Are they claiming that expansionary fiscal policy actually reduces interest rates? Yes or no answers, please, with explanations of how you got these answers and why the straightforward framework I laid out above is wrong.

Quick responses first, followed by explanations behind my thinking.
#1: Is there only one right deficit level? Answer: No. The right deficit depends on private behavior, which changes. MMT would set public spending always to the level required to achieve full employment, and then accept whatever deficit may result.
#2: Is there no ability to substitute monetary for fiscal policy? Answer: Little to none. In a slump, cutting interest rates is weak tea against depressed expectations of profits. In a boom, raising interest rates does little to quell new activity, and higher rates could even support the expansion via the interest income channel.
#3: Does expansionary fiscal policy reduce interest rates? Answer: Yes. Pumping money into the economy increases bank reserves and reduces banks' bids for federal funds. Any banker will tell you this.
#4: Does MMT accept Krugman’s “straightforward framework”? No. We can come back to this at the end.
Is there only one right deficit level? No, because for one thing, MMT would establish a public option in the labor market — a federally funded job guarantee — thereby ensuring full employment across the business cycle. The deficit, then, would rise and fall with the cycle, as the job guarantee becomes a new stabilizer, automatically moving toward the “right size” in response to changes in the level of aggregate spending.
In the absence of a job guarantee, things get trickier. Leaving monetary (and exchange rate) policy aside, the government has to allow the deficit to go where it needs to go in order to accommodate the private sector’s net savings desires. If the private sector wants to spend less and save more, the public sector will need to accommodate that desire by running a bigger deficit or the economy will be pushed away from full employment. Krugman drew up the perfect schematic — based on the sector balance framework adopted by MMT — to explain all of this 10 years ago.
Is there no ability to substitute monetary for fiscal policy? Not much. Krugman sees MMT as saying that fiscal policy can always deliver the “right size” deficit to maintain full employment. He’s challenging that by asserting that you can have any size deficit and still have full employment because the central bank can always establish the “right size” interest rate to get you there. I disagree.
It is true that the Fed can pursue any rate policy it desires. It does not follow, however, that cutting interest rates will work to induce enough spending to maintain full employment. You can’t simply assume borrowers will always have the appetite for more private debt, even if you make it really cheap to borrow. Businesses borrow and invest when they’re swamped with customers (or expect to be). They don’t passively take on more debt simply because the central bank has dangled cheaper credit before them.

The evidence suggests that interest rates don’t matter much at all when it comes to private investment: J.P. Morgan (here and here), the Reserve Bank of Australia (here), the Federal Reserve (here) and the Bank of England (here). It is even possible, as MMT has shown, that cutting rates could further slow the economy because lowering rates cuts government expenditures (interest payments), thereby exacerbating contractionary fiscal policy.
This is in fact what modern monetary theory suggested when the European Central Bank went to negative rates, which MMT sees as a contractionary tax. But MMT recognizes that raising rates could offset contractionary fiscal policy, though in a highly regressive manner as the interest paid by the government tends to go to those with the highest incomes.
Does expansionary fiscal policy reduce interest rates? Yes, unequivocally. You won’t see it in Krugman’s stylized graphic (below), but it does happen in the real world, where the interbank market exists.
Imagine the government is running a trillion-dollar deficit, sending out checks for military weapons, contracting to do massive infrastructure projects, and so on. All of those checks get deposited into financial institutions across the country. And each time a check is deposited, the bank gets a credit to its reserve account at the Fed.
When you pay your taxes, your bank loses reserves, but with a trillion-dollar deficit, there is a huge net infusion of reserves into the banking system. If the central bank takes no action to prevent it from happening, the overnight lending rate — the federal funds rate — will fall to a zero bid.
Why? Because all banks are flush with non-interest-bearing reserves, and everyone is scrambling to lend them to another bank. When everyone’s a seller and no one’s a buyer, the price goes to zero. To prevent this, the central bank steps in.
Before the collapse of Lehman in 2008, the Fed conducted open-market operations (selling bonds to mop up enough reserves to get the interest rate up). This was all coordinated with the Treasury Department on a daily basis, as I explained here.
Today, the Fed simply pays interest on reserves to establish a positive rate. That doesn’t change the fact that deficits, in and of themselves, put downward pressure on the short-term interest rate.
Yes, the Fed has a reaction function, and it can vote to raise rates in response to perceived inflationary pressures associated with deficit spending. But that is a different matter. That is fighting against the “natural” gravitation.
Is there some reason the straightforward framework Krugman laid out is wrong? Yes, as even its creator went on to acknowledge. MMT rejects the IS-LM framework that Krugman uses to demonstrate the conclusion that widening budget deficits put upward pressure on interest rates and crowd out private investment.
The model remains the workhorse for many mainstream Keynesians. MMT considers it fundamentally flawed. It is incompatible with much of Keynes’s “The General Theory of Employment, Interest and Money.” It was designed for a fixed-exchange rate regime, and it is not stock-flow consistent.
Here’s the framework Krugman presents as a challenge to MMT. 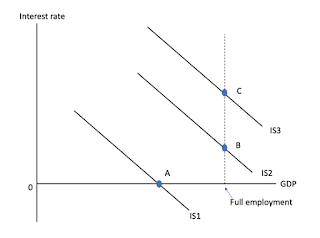 Each of the IS curves (1-3) represents a different fiscal stance. This framework shows that the government can expand its deficit and move the economy from a depressed condition at point A to full employment by shifting IS1 to IS2. The economy is now at full employment, but with higher interest rates and lower private investment.
Keep this in mind: Higher deficits give rise to higher interest rates, which give rise to lower investment. The last bit is referred to as “crowding out.” This is the inherent tradeoff that MMT denies and Krugman defends.
And it’s easy for him to defend it because his model assumes a fixed money supply, which paves the way for the crowding-out effect!
Krugman’s framework treats investment as a simple function of the interest rate. Higher rates mean lower investment, and vice versa. Central banks can juice (or slow) the economy simply by lowering (or raising) interest rates. It’s Pavlovian in its simplicity: stimulus-response.
Keynes’s analysis was more nuanced. Investment decisions were forward-looking, heavily influenced by “animal spirits,” and overwhelmingly dependent on the state of profit expectations. When the profit outlook is sufficiently grim, no amount of rate cutting will entice businesses to borrow and invest in new plant and equipment (think Great Recession).
Conversely, when the outlook is exuberant, businesses may borrow and invest even more, despite the central bank’s desire to slow an expansion by raising interest rates (think savings and loan crisis). The downward-sloping IS curve does not allow for either of these possibilities. Yet both outcomes can, and do, occur.
One final point. Krugman says there is an inherent tradeoff between fiscal and monetary policy. I agree, but not with the tradeoff he describes. Deficits don’t automatically drive interest rates higher, and higher interest rates don’t automatically translate into lower private spending.
That tradeoff is disputed, and not just by MMTers. The tradeoff that matters is the one that Hyman Minsky and James K. Galbraith have highlighted. Monetary policy “works” by driving people into debt. Fiscal policy works by driving income into people’s pockets. As Galbraith put it:

There are two ways to get the increase in total spending that we call ‘economic growth.’ One way is for government to [deficit] spend. The other is for banks to lend. For ordinary people, public budget deficits, despite their bad reputation, are much better than private loans. Deficits put money in private pockets…This is called an increase in ‘net financial wealth’… In contrast, when a bank makes a loan, the cash is not owned free and clear.

That’s the tradeoff that interests me. Should we lean more heavily on (monetary) policy that works by leveraging the private sector’s balance sheet or on (fiscal) policy that works by strengthening it?
So, there you have it. Two no’s, a not really and a yes in response to Krugman’s questions. (Un)fortunately, this will be the last response from me, since my editors have asked me to continue any further discussion offline. I thank Paul for engaging me and am more than happy to do this.
Publicadas por masterecointer@gmail.com a la/s 16:49